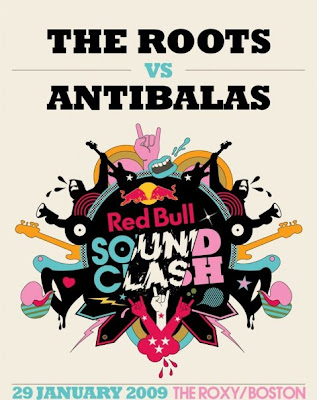 Red Bull Sound Clash is a totally unique clash of sounds, styles and creativity, where two bands (The Roots and Antibalas) don’t battle each other, but instead collaborate to create an innovative live music performance.

The Red Bull Sound Clash experience features two bands with different music styles facing off on two stages positioned on opposite ends of the venue with the audience in the middle. In this case The Roots and Antibalas will partake in this interactive musical performance. In a series of four rounds, the bands perform various tasks, some rehearsed, some improvised, to showcase the array of their musical abilities. The audience participates in the back-and-forth exploration between the bands by judging each round.

The Roots – Grammy award winning American hip-hop band from Philadelphia, Pennsylvania and are famed for having a jazzy, eclectic approach to hip hop