Together Trailer December 31st, 2009 from TOGETHER BOSTON on Vimeo

Together: The New England Electronic Music Festival is that rarest of opportunities. For many people, dance music and its continuing surge in popular culture provides a chance to collaborate and communicate as never before: thoughts are remixed, songs are made in cooperation and entire events are promoted collectively.

Together will be an extension of this idea, a multi-venue, multi-party, multi-panel super event uniting not simply genres of music, but entire scenes once thought to be disparate. The city of Boston provides a unique platform as well, with its enormous student population, numerous technology centers and differing types of venues.

Together Boston will reach thousands of personalities within the mixing generation. As The New England Electronic Music Festival we will touch on not just dance music, but the emerging technologies of electronic music production. By involving different groups—from the most senior avant-garde lovers to the youngest members of this new sound, this is the genesis of a new era of collaboration and innovation for the New England arts, technology and music communities. 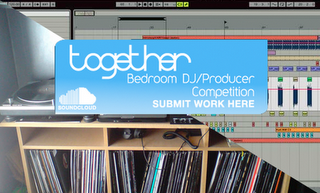 In addition to the number of amazing events, workshops, record fairs and speakers going on during this week in February, I will personally be involved in a couple shows, including WE THE PEOPLE @ Estate Nightclub on February 10th featuring DJ KLEVER, CONGOROCK and much more! I have also been asked to participate in judging the TOGETHER DJ/PRODUCER COMPETITION. The deadline for submissions of original tracks is January 14th and deadline for DJ mixes is January 22nd. For full information you can visit TOGETHERBOSTON.COM